WPC provided Mercedes-Benz Vans lead agency Oliver Schrott Kommunikation with wide-ranging editorial support in the lead up to the launch of the new Mercedes-Benz Sprinter – from press releases and speeches to data sheets and presentation material.

Mercedes-Benz Vans has been building its Sprinter van since 1995, since when the company has sold more than 3.4 million of them. With annual production volumes of more than 200,000, it is the biggest-selling van in the brand’s line-up. No surprise, then, that the launch of the new-generation Sprinter is a big deal for the Stuttgart automotive giant. Held at the company’s Duisburg plant, the world premiere of the new Sprinter was themed “Next Level” and focused very much on the transformation of Mercedes-Benz Vans from what CEO Volker Mornhinweg described as “purely a vehicle manufacturer to a provider of holistic mobility solutions”.

As well as the hardware upgrades you would normally expect from a next-generation vehicle, Mercedes-Benz Vans is keeping pace with developments in the car world and offering Sprinter customers an array of intelligent products and services. Volker Mornhinweg again: “The new Sprinter is to conventional vans what the smartphone is to a plain old mobile phone.” A new communications module keeps the new Sprinter constantly connected to the internet and thus part of the Internet of Things. Mercedes PRO connect is was Mornhinweg describes as the “operating system for our Sprinter hardware” and provides a “digital ecosystem” that interconnects vehicle and services. For Sprinter customers, for instance, it means the controller of a van fleet can check destinations, fuel levels and routes from his office while the vehicles are out on the road. Routes can also quickly be recalculated centrally to fit into revised job schedules and then transmitted to the navigation systems of the affected vans. The new Sprinter also features the new MBUX multimedia system recently unveiled in the new A-Class.

The versatility of the new Sprinter has been substantially enhanced with a building-block approach to combinations of powertrain, wheelbase, transmission and body, the outcome of which is that the new Sprinter will be offered in more than 1,700 basic variants. Existing rear-wheel and all-wheel drive variants are now augmented by front-wheel drive, delivering more payload and a lower loading edge, and providing a particularly affordable entry price point. The new front-wheel-drive variant also means the new Sprinter can now be offered as a cab-with-engine, which is an important development for the motorhome market, where around 90 percent of camper vans are front-wheel drive. An electric-drive Sprinter is also waiting in the wings and will join the other powertrain variants in 2019. 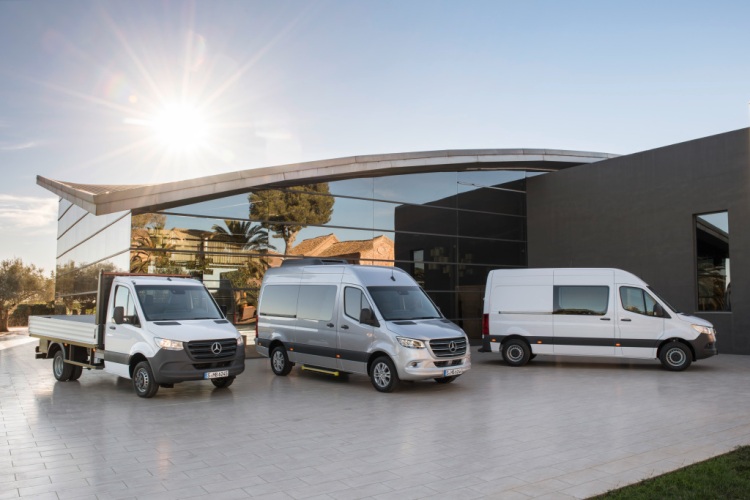